Free worksheets, study guides, essay writing, revision guidance and YouTube links. Writing styles, fiction and non-fiction reading skills. Analysis of plays, novels and poetry. For teachers and independent learners. If an internal link, please try the drop down menu at the top of the page.

Here are some more extracts from Jekyll and Hyde, usually in the order that they appear in the text; they are printed in black with quotes, for discussion and analysis, being underlined.  My text annotations, which comment explain, interpret and analyse, are in blue.   I deal with themes, characterisation, tone, authorial purpose and context, as well as how the text’s  form, structure and language create tension and meaning.  You will also find character profiles on the site, but I try not to repeat what you can easily find elsewhere.

The doctor had bought the house from the heirs of a celebrated surgeon; and his own tastes being rather chemical than anatomical, had changed the destination of the block at the bottom of the garden. It was the first time that the lawyer had been received in that part of his friend’s quarters; and he eyed the dingy, windowless structure with curiosity, and gazed round with a distasteful sense of strangeness as he crossed the theatre, once crowded with eager students and now lying gaunt and silent, the tables laden with chemical apparatus, the floor strewn with crates and littered with packing straw, and the light falling dimly through the foggy cupola.

We later discover, in chapter 9,  that the anatomical theatre belonged to ‘Denman’ who, being a man of the primeval den, might therfore be said to investigate the primitive nature of humans; he is Jekyll’s professional precursor.  Jekyll’s departure from ‘anatomical’ to the ‘chemical’ with its necessary paraphanialia is, in my mind, symbolic of his differences with Lanyon the doctor of the human body.  Jekyll, we later discover, is exploring human nature through ‘transcendental medicine’, which I view as a ‘modern’ form of medieval experimental alchemy. The ‘strangeness’ of the theatre echoes the novella’s title and subtly raises tension; the ‘dingy, windowless structure ‘ symbolises the dark depths to which Jekyll sinks and for Stevenson’s nineteenth century reader, who knew nothing of the plot, it intensified the sense of foreboding.  The mystery of the unfolding events is lost to modern readers who will all know the connection between Jekyll and Hyde.   The contrast between the energetic ‘crowded with eager students’ and the ‘gaunt and silent’ theatre provides a chilling impression of death and we have symbolic dimness and fog to represent a lost soul.

Mr. Utterson was at last received into the doctor’s cabinet. It was a large room, fitted round with glass presses, furnished, among other things, with a cheval-glass and a business table, and looking out upon the court by three dusty windows barred with iron. A fire burned in the grate; a lamp was set lighted on the chimney shelf, for even in the houses the fog began to lie thickly; and there, close up to the warmth, sat Dr. Jekyll, looking deadly sick. He did not rise to meet his visitor, but held out a cold hand and bade him welcome in a changed voice.

It is not until chapter 8, that Utterson comments on the strangeness of the cheval glass being in the ‘cabinet’ (private chamber).   The fog is now lying thickly even ‘in the houses’ and this symbolism, particularly when combined with Jekyll’s ill health and the pre-modifying adverb ‘deadly’, creates a feeling of doom.  Jekyll’s literal and  synecdochal cold hand reminds us of other characters’ reactions to Hyde.  Jekyll’s changed voice, whilst alarming here, causes a real dilemma for Utterson and Poole later in the novella.  These elements all signal that Jekyll is in desperate circumstances.

“No,” said the other. “I cannot say that I care what becomes of Hyde; I am quite done with him. I was thinking of my own character, which this hateful business has rather exposed.”

Jekyll’s claim to be ‘done with Hyde’ proves to be ironic in that although he may have done with Hyde, Hyde has not done with him!  We may regard Jekyll as a gothic hero – and Stevenson’s protrayal of him fits with Aristotle’s definition of tragedy.   The relevant aspect of tragedy here is the process of recognition of one’s circumstances (‘Anagnorisis‘) i.e. the making of a critical discovery.  Although the reader finds Jekyll talking rather mystifyingly about his role at this point, Stevenson is showing that the hero now recognises the power of evil in human-beings.

Utterson ruminated a while; he was surprised at his friend’s selfishness, and yet relieved by it.

Utterson’s reaction draws us to wonder further about Jekyll’s character.  He does seem to being blackmailed, perhaps for professional or social unaceptable behaviour, or, as Enfield condones for ‘capers in his youth’.  However, we do not think for one moment that the respectable Fellow of the Royal Society is an accessory after (if not before) the fact to murder!  For the status-conscious Victorians, this is not just a murder but a murder of a venerable and respected Member of Parliament.

“And now one word more: it was Hyde who dictated the terms in your will about that disappearance?”

The doctor seemed seized with a qualm of faintness: he shut his mouth tight and nodded.

Utterson’s question leads us to discover that Jekyll is lying: you might consider the effect of the alliteration in the vague phrase ‘seemed seized’ and the overlap in meaning of the words ‘qualm‘ and ‘faintness‘.  Stevenson is suggesting that Jekyll’s involuntary response is closer to the truth than the conscious and deliberate action when ‘he shut his mouth tight and nodded’.

“I knew it,” said Utterson. “He meant to murder you. You have had a fine escape.“

Dramatic irony!  The last thing Hyde wants is for Jekyll to die.  Our detective does not appear to have picked up the clues to Jekyll’s lies, but he does question Poole for corroboration.

“I have had what is far more to the purpose,” returned the doctor solemnly: “I have had a lesson—O God, Utterson, what a lesson I have had!” And he covered his face for a moment with his hands.

Anagnorisis (see above):The tragic hero recognises his dire straights but he does not yet understand that his situation cannot be resolved.  Instead, Jekyll, as described in the next chapter, once more becomes a companionable social asset ‘for more than two months’.

Presently after, he sat on one side of his own hearth, with Mr. Guest, his head clerk, upon the other, and midway between, at a nicely calculated distance from the fire, a bottle of a particular old wine that had long dwelt unsunned in the foundations of his house. The fog still slept on the wing above the drowned city, where the lamps glimmered like carbuncles; and through the muffle and smother of these fallen clouds, the procession of the town’s life was still rolling in through the great arteries with a sound as of a mighty wind. But the room was gay with firelight. In the bottle the acids were long ago resolved; the imperial dye had softened with time, As the colour grows richer in stained windows; and the glow of hot autumn afternoons on hillside vineyards was ready to be set free and to disperse the fogs of London. 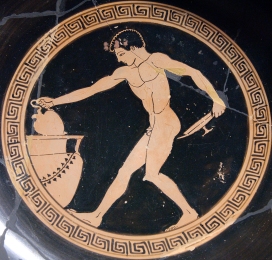 The wine motif reappears. Utterson is a wine aficianado and this identifies him as a fully paid up member of the professional middle class with a taste for the finer things in life: the wine is old and it has been selected because it is a ‘particular’ one;  it is perfectly placed to warm before being drunk; for years, it has been stored in the wine cellar which is ‘in the foundations’ of the symbolic house of propriety; and the wine represents maturity, sophistication, culture and elegance.  Drinking wine is a civilised activity – and viniculture does date back 6000 years! 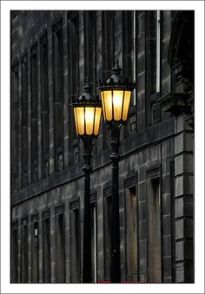 The simile ‘like carbuncles’ either means like precious gemstones or like puss-filled boils: which is right?  Well. from youth, Stevenson loved the warming glow of Edinburgh’s streetlamps and you may care to read his poem ‘The Lamplighter‘.   My view is that Stevenson is describing the beauty of gaslit street lamps which shine with the red ‘glimmer’ of natural rubies or garnets.  This beauty, born of the Industrial Revolution, tentatively shines through, despite the never-ending fog of discord and corruption that swirls in the sky above.  London becomes the apocalyptic ‘drowned city’ (Book of Revelation 12), in which Satan seeks to drown Mother Church.   The fog’s clouds have, post-Eden, ‘fallen’ onto the city with an onomatopoeic ‘muffle’ and a suffocating ‘smother’ but they do not extinguish the town’s life-affirming vitality which courses through its arterial streets ‘with a sound as of a mighty wind’.  I believe that this is an allusion to that sound from heaven which was ‘as of a rushing mighty wind’ when the people were filled with the Holy Ghost (Acts 2:2 ).   As a relevant aside, it is worth mentioning that the biblical doubters of this event, when people spoke in tongues, said ‘These men are full of new wine.’ (Acts 2:2:13 my italics).  In the extract above, the colour of the ‘stained windows’, which stand metonymically for church and Christian faith, together with the semantically charged old wine full of stored Mediterranean sunlight are able to ‘disperse the [evil and low visibility] fogs’.

Moreover, the people of London have created a dynamic yet orderly ‘procession’ of life and vitality running through the city’s life-giving ‘arteries’ despite the debilitating fog.  There is, however, another meaning to ‘procession‘ besides that of orderly, ceremonial progress: in Christianity, ‘procession‘ is how the Holy Spirit is sent into the human world (at least that is my understanding);  might we therefore say that this extract describes the never-ending battle between Satan and the Holy Spirit for the souls of Londoners?   Such images appear frequently in literature and art: for instance, see the depiction of such a battle in William Blake’s engraving The Good and Evil Angels Struggling for Possession of a Child (below).  The blond figure is the Good Angel; the dark figure, grasping at the child, is Evil. 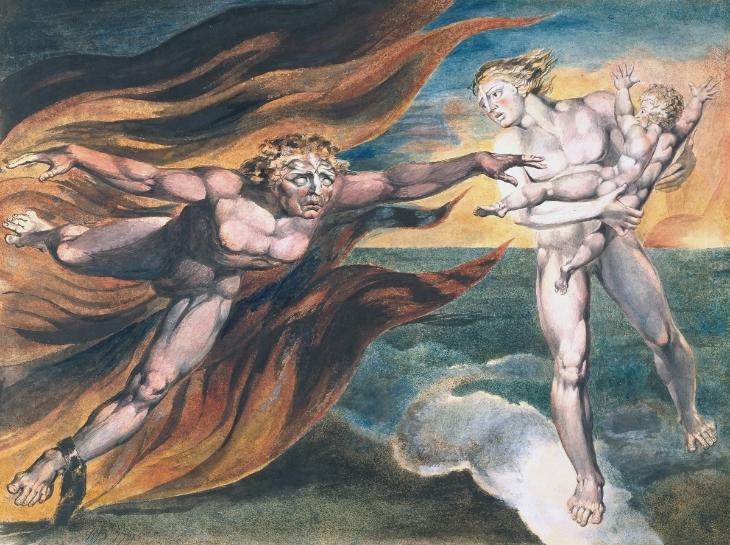 From this extract, we see how Stevenson also uses the setting to present the allegory of good versus evil.

At the same time, the stage has been set for Utterson and Guest to put the ‘mystery to rights’.  There has been progress in the investigation: firstly, the handwriting has now been examined forensically and secondly, neither Guest nor Utterson think that Hyde is mad.

“What!” he thought. “Henry Jekyll forge for a murderer!” And his blood ran cold in his veins.

So, whilst life is ‘still rolling’ through the ‘great arteries’ of London, Utterson’s blood ‘ran cold in his [slow-moving] veins’.   This is an unnerving end to the chapter with the mystery deepening even further.  The connotation of evil is signified here with the adjective ‘cold’; this is one of the novella’s motifs, which includes words such as ‘icy’, ‘ice’, ‘froze’ and ‘chill’.

For more of my pages on ‘Strange Case of Dr. Jekyll and Mr. Hyde’, please hover your cursor over the Stevenson drop-down menu at the top of the page.

If you would like to email me, just fill in your details in the form below and I'll get back to you.

This work is licensed under a Creative Commons Attribution-NonCommercial 3.0 Unported License.