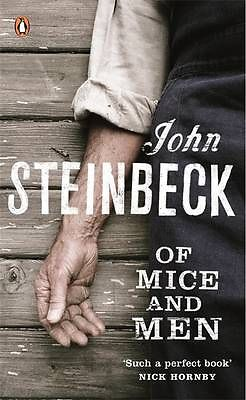 Slim is a highly skilled mule and horse driver who is said to be capable of the extraordinary feat of ‘killing a fly on the wheeler’s butt with a bullwhip without touching the mule’ (37); the omniscient author uses the rhetorical device of triple phrasing to show Slim’s skills even extend to being able to drive ‘ten, sixteen, even twenty mules in a single line’ (37).  As a jerkline skinner, he is ‘the prince of the ranch’ (37), having magnificent presence, moving ‘with a majesty only achieved by royalty’ (37) and standing up ‘slowly and with dignity’ (40).  He is an authoritative figure and one to whom all defer, even including Curley who is told at one point to ‘listen’ (72).

Slim displays an inner steadiness: he has a ‘gravity in his manner and a quiet so profound that all talk stopped’ (40).  This gravity, and his symbolically ‘level and unwinking’ eyes (47), is enhanced, or perhaps created by his having an understanding which  is ‘beyond thought’ (38) and his ability to hear ‘more than was said’ (37).  Slim sees ‘through George and beyond him’ (39) when he considers why men do not generally travel around together.  He remains an enigma to such men as Carlson, who asks bemusedly, ‘Now what the hell ya suppose is eatin’ them two guys?’ (121)

In addition to Slim understanding more than he is told, he also has sound judgement, being able ‘to tell a mean guy from a mile off’.  Slim’s word is taken on any subject (37) and he is called upon to decide the fate of Candy’s dog. Characters such as Candy and Whit respect his view and Carlson asks him: ‘W’hy’n’t you get Candy to shoot his old dog?’  (40) when he pragmatically means would you tell him to do it.  The author establishes Slim as the novel’s moral tuning fork and he finally uses our trust in Slim’s nature to confirm the correctness of George’s actions at the end of the novel, when he says:  ‘You hadda, George.  I swear you hadda.’ (121).  He is the epitome of manhood and manly values: ‘A guy got to sometimes.’ (121)

Alongside the human and ethical sides to Slim’s nature, there is a sense of the divine as well: his hands are ‘delicate in their action as those of a temple dancer’ (38) and he has ‘Godlike eyes’ (45); he also has priest-like qualities to the extent that George’s voice unconsciously takes on the ‘tone of confession’ (45).  Priest-like, Slim listens and does not judge when George describes incidents from the past and his relationship with Lennie.  It is interesting to look at the structural contrast between both this incident (38) and the the scene with the boss who is highly suspicious of George’s motives, thinking he is taking Lennie’s pay (24-5).

Finally, Slim displays what we might today call interpersonal intelligence.  He does not mince his words – he is straight with Curley’s wife after she tells him that she is looking for Curley, saying: ‘Well, you ain’t tryin’ very hard.  I seen him goin’ in your house.’ (35).  Slim does not waver when ‘Candy looked a long time at Slim to try to find some reversal.  And Slim gave him none.’ (54).  Steinbeck shows Slim’s assurance when he stops Carlson from leaving the bunkhouse with Candy’s dog: when asked ‘What ya mean?’, he replies phlegmatically, ‘Take a shovel’.  Not only is he plain speaking, but he is also decisive in action, as when he drowns four dogs ‘right off’ (39).  He demonstrates respect for George when he looks ‘approvingly for having given the compliment’  and solidarity when he does not hesitate to come ‘directly to George and sit ‘very close to him.’, after George has shot Lennie(121).

How do you think Steinbeck uses the character of Slim in the novel as a whole to convey important ideas about men and manhood at that time?