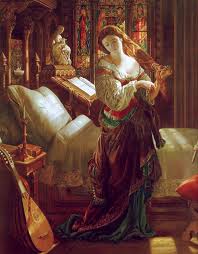 This material derives mainly from my notes on three critical works, which are cited at the end of the page.

The form is that of the Spencerian stanza i.e. nine lines, the first eight being iambic pentameter and the last an iambic hexameter (alexadrine), which rhyme ababbcbcc.  Each of the nine line verses has a distinct content.

Note the structural antithesis of intense cold (and chastity), age and death with warmth (and fulfilled love) and youth.

St Agnes Eve has a mystical power when ‘young virgins might have visions of delight’ 47 outside the normal experience where imagination can rise to supernatural heights and penetrate beauty-truth.  Imagination gives insights into the experience of the hereafter.  Keats felt that immortal passion can only be experienced after a life of intensity of experience.  Madeline’s dream carries her beyond the ‘bar/that keeps us from our homes ethereal.’  On awakening Madeline ‘perceives the human life and the spiritual repetition of it’ ‘the mortal and the immortal’.  ‘In the mortal world beauty does not exist as truth.’  Mortality threatens to dispel the vision.  In the vision of immortality, Porphyro’s eyes are ‘spiritual and clear’; in life they are ‘sad’, he is death pale.  Immortal (heaven’s bourne) and eternal (a mortal concept) are diametrical opposites.

The castle of … mortality.

Cold and silvery pale moonlight and sensuous ruddiness of purple and rose.

The wintry moon casts a sensuous ‘roseate stain’, rose bloom falls on her hands in prayer.  Look for contrast of silver, with gold crimson etc 284/5 320/2 253/6.  Scents of rose and violet merge 320/2. the union consummated and heaven’s bourne attained.

Porphyro moves from outside cold and darkness to warmth of castle to then ascend in stages from ‘level chambers’ to ‘paradise’.  Doors & chambers have symbolic value for Keats:   From animal existence to understanding of mystery,  He is shaded by the ‘buttressed’ by human existence 77, he moves beyond the ‘mansion foul’ level chambers 89 of ‘barbarian hordes’.  First chamber: no passion 113 mere existence no thought.  Consciousness of sensuous powers drives him on to purgatory where he can look on what he seeks.  Stillinger sees the eremit 277, a famished pilgrim 337/9, saved. A spiritual journey, by stages.  This is an inward journey/experience 163 166. Union of mortal and immortal, chastity & passion, perfect form and intense experience. The experience in Chamber of maiden thought sharpens one’s vision into the nature of Man.

Once the spiritual repetition of life is achieved and the lovers proceed to the dark secret beyond: ‘darkling way’ 343 ‘elfin’ storm beyond human existence 343 and, finally, the spaceless, timeless, selfless realm of mystery.  They fade.

Narrative: they act directly before us in the past.  The action passes from them into the control of things around them: the lamp, arras, carpets, bloodhound, chains, key, door.  The passive verb 356 ‘was heard’.  Loss of selfhood.  Narrative becomes mixture of past and present: the ‘historical present’.  They ‘are gone’: the adjectival use of go = state of being not an action 370.

The beadsman provides a framework of chill: he skirts the chambers, had his ‘deathbell rung’ 22, frosted breath 6, numb fingers 5.  He seeks ‘another way’ 25: not sensuous, avoiding life and death 8, seeking truth without sensation and without the greatest (death).  He sleeps among ‘ashes cold’ 378

Also as an antithesis to P and M are the revellers who cannot see beyond their momentary excitement, petty passions of the world 68/9.  ‘Bloated wassailers’ 346.  ‘bloodthirsty race’ 99.  Can only dream of human life 372-5 and cannot rise to the dream-vision of the spiritual repetition of human life

Angela:  a norm of humanity careful of her soul but belongs to the hall of revelry. Will not experience the love forever warm because she lacks sensuous and spiritual intensity – weak in body and soul 90 155.  She laughs at Angelas’ dream ‘in the languid moon 127, the light of he ideal.  She considers Porphyro’s desire to be evil sensuous.  She rises to beyond her strength and must be led down to a ‘safe level matting’ 196.  Dies 375

Warriors’ nightmares in conclude too.

People have responded to the poem by considering its ‘heady and perfumed loveliness’, thinking it ‘a monody of dreamy richness’, a ‘lyrical emotion’, an affirmation of love’, a ‘choral hymn’.  Realism is in the framework and action in the romance, so there is no conflict.  P never in danger.  Perhaps just a fairy tale romance, then?

The poem’s contrasts: youth and old age, vitality and death, warmth of chamber and rest of castle (and outside), high romance and the sordid/commonplace.

The critical allegory of a spiritual ascent and where beauty turns out to be truth is doubtful: when Madeline awakes she cries ‘woe is mine’ 328.  Also heavenly spiritual  repetition does not follow earthly pleasure, instead the earthly pleasure follows spiritual pleasure.

P is devious: he has a ‘stratagem’ 136.  Angela calls him ‘cruel ..wicked’ 140/143  He threatens suicide 151/3.  The allusion to Merlin 170 enforces the sense that P is not to be trusted. Fairy lore and sorcery are implied with ‘legion fairies’ and ‘pale enchantment’.  P calls for a ‘Morphean amulet’, a sleep inducing charm, to prevent her from awakening.  Madeline fasts (known as a means of preparing for devotion) before going to bed: in contrast, P is pagan in his feast and the eastern luxuries.  When she wakes, she utters ‘witless words’ 303.  She is a ‘deceived thing’ 333

Also note the hunting imagery: Madeline is ‘ring dove’, her heart a ‘tongueless nightingale 206, ‘dove folorn’ 333.  P robs her nest 340.  She has the status of St Agnes’ ‘lambs unshorn’ 71.  P’s deception reminds us of the rape of Philomel.  Also in Paradise Lost Book IV, when confronted by the beautiful angel Zephon, ‘Abasht the devil stood’.  Like the devil in Paradise Lost, Porphyro recovers to pursue his stratagem ‘ anon his heart revives’ 226.

Also there is a connection with ‘Cymberline’ where villainous Iachimo emerges from a trunk, to gaze at the sleeping Imogen.  (Iachimo compares himself to Tarquin, who raped Lucrece.)

However, also consider Madeline as the hoodwinked dreamer: she broods ‘on love’ 43, she follows the superstitions of ‘old dames’ 45, she ‘sighs for Agnes’ dreams’ 62.  She is ‘hoodwink’d with faery fancy’ 70, is a ‘charmed maid’ 192, ‘like a mermaid’ 231 (allusion to Ophelia who was also entrapped in a dreamworld).  Her ritual prevents her looking behind … and seeing Porphyro! She calls herself ‘a deceived thing’.  She never fully wakes and believes in the ‘faery storm’ 343 and ‘sleeping dragons’ 353

‘What the imagination seizes as beauty must be truth – whether it existed before or not  …   The imagination may be compared to Adam’s dream – he awoke and found it truth.’  Consider Dickinson’s ‘I died for Beauty’

‘I wish to diffuse the colouring of St Agnes Eve throughout a Poem in which character and sentiment would be the figures to such drapery.’

‘tho’ there are no improper expressions but all is left to inference, and tho’ profanely speaking, the Interest on the Reader’s imagination is greatly heightened, yet I do apprehend it will render the poem unfit for ladies.

‘rather a picture than a story’.   ‘The portrait of the heroine, preparing to go to bed, is remarkable for its union of extreme richness and good taste.’

‘succeeds in evading all causal difficulty in the line of narrative; with no shadow of pretence to such interest as may be derived from stress of incident or depth of sentiment … a perfect and unsurpassable study in pure colour and clear melody.’

The poem ‘though it assumes a narrative form, is hardly a narrative, but rather a monody of dreamy richness, a pictured and scenic presentment, which sentiment again permeates and over-rules.’

Keats capacity for framing a story out of successive details of a suggestive and self-consistent kind was decidedly feeble.’

‘Delicate transfusion of sight and emotion into sound’

Keats shows an incapacity to create convincing characters and for genuine dramatic action, in the narrative form.  For instance, Porphyro is an unspiritual Romeo; Angela remains a functional character; Madeline does not have Juliet’s depth.

However, the use of the narrator gives play to the personality of the Romantic poet.  Keats gives a striking setting and immediacy of thought and feeling – an ‘actuality’ of scene and setting.  The sexual act of rose melting into violet does not for instance have the strong physical presence of the window.

See my other pages on Keats:

On First Looking into Chapman’s Homer