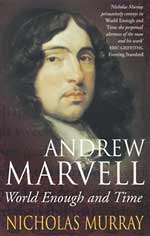 One of the English metaphysical poets (1).

Educated at Cambridge, he worked as a clerk, travelled abroad, and returned to serve as tutor to Lord Fairfax’s daughter in Yorkshire. In 1657 he was appointed John Milton’s assistant in the Latin Secretaryship, and in 1659 he was elected to Parliament, where he served until his death. He was one of the chief wits (2) and satirists (3) of his time as well as being a Puritan and a public defender of individual liberty.  Today, however, he is known chiefly for his brilliant lyric poetry (4), which includes “The Garden,” “The Definition of Love,” “Bermudas,” and “To His Coy Mistress,” as well as for his “Horatian Ode” to Cromwell.

(1)   Metaphysical poetry is often characterised by a wide range of imagery, often unexpected, in the development of a poet’s ideas or argument.

(2)   Wits poetically combined or contrasted ideas/feelings in an unexpected way.

(3)   Lyric poetry expresses in a personal manner the feelings and thoughts of an individual speaker.  It is typically about love.  A form of writing particularly between 1550-1650.

(4)   Satire examines vice or folly with a view to making it ridiculous or contemptible.  It is directed against a person or a type.